Is a Dentist's Testimony Regarding Routine Administration of an Anesthetic Admissible as Habit Evidence in a Malpractice Trial?

I've always enjoyed evidentiary issues and for that reason was excited to read a recent opinion by the New York Court of Appeals regarding the admission of habit evidence in a dental malpractice action.

In Rivera v Anilesh, 2007 NY Slip Op 05134, the plaintiff sued a number of people, including her dentist, alleging that a severe infection in her jaw originated with malpractice committed by her dentist while injecting a second round of anesthesia during the course of removing the plaintiff's tooth.

The defendant dentist moved for summary judgment, alleging that she had no recollection of the specific procedure at issue.  As such, she relied upon her customary practice to establish that the treatment rendered to the plaintiff on the date of the alleged malpractice did not differ from her ordinary methods.

(She) state(d) that the administration of this type of injection was a "routine procedure[]" that she did "every day" to "at least three to four to five" patients and that she had been practicing as a dentist since 1982. Dr. Anilesh further explained that a second injection of anesthesia was required in 15% to 20% of her cases. She provided a step-by-step description of the procedure she used to give injections to her patients and claimed that, when a second injection was necessary, she administered it at the same site as the first injection. Dr. Anilesh noted that if a patient complained of unusual pain or any other unexpected events occurred during treatment, she would make a notation in the patient's medical chart but that no such note existed for Rivera. Dr. Anilesh's expert opined that Dr. Anilesh's treatment of Rivera was within the applicable standard of care in dentistry.

The Court explained the basis for the admission of habit evidence in New York:

"(E)vidence of habit has, since the days of the common-law reports, generally been admissible to prove conformity on specified occasions" because "one who has demonstrated a consistent response under given circumstances is more likely to repeat that response when the circumstances arise again." The applicability of this doctrine is limited to cases where the proof demonstrates "a deliberate and repetitive practice" by a person "in complete control of the circumstances" (id. at 392) as opposed to "conduct however frequent yet likely to vary from time to time depending upon the surrounding circumstances" (id. at 389). If these conditions are satisfied, "a party should be able, by introducing evidence of such habit or regular usage, to allow the inference of its persistence . . . on a particular occasion"...

The Court then noted that the issue of habit evidence had been considered by it on only a few occasions, and never in a medical or dental malpractice context.  The Court then concluded that the evidence was properly admitted in this case:

(T)he record here supports the admissibility of Dr. Anilesh's routine procedure for administering injections of anesthesia under the standard articulated in Halloran in light of the frequency that this technique was used in Dr. Anilesh's dental practice and the nature of the routine conduct...there is no evidence suggesting that Dr. Anilesh's pre-extraction injection procedure would vary from patient to patient depending on the particular medical circumstances or physical condition of the patient. This record therefore contains "proof of a deliberate and repetitive practice" — the mundane administration of a local anesthetic prior to a relatively routine tooth extraction — by a trained, experienced professional "in complete control of the circumstances"...

While I agree with the Court's decision to an extent, I am uncomfortable with the application of habit evidence under the facts of this case.  It seems to me that this holding essentially encourages health care providers who frequently perform routine procedures to avoid documenting anything that occurs during a procedure that is somewhat out of the ordinary.  That way, when called upon to testify regarding a frequently performed procedure, s/he can allege an inability to recall the specific procedure and then assert that the procedure in question must have been typical since the medical record indicates that nothing unusual occurred.

In a way, this decision seems to sanction convenient cases of amnesia when the underlying "forgotten" facts are the very heart of the malpractice claim.  But, then again, I suppose it's ultimately within the province of the fact-finder to determine whether the alleged case of amnesia is actually believable. 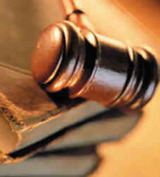 I'm inclined to disagree with the New York Court of Appeal's recent decision in Pahlad v Brustman 2007 NY Slip Op 02592.  The decision is brief and simply upholds the  First Department's decision which granted the motion of medical malpractice defendants to dismiss the Complaint.  The First Department and the Court of Appeals concluded that equitable estoppel did not apply to toll the 2 1/2 year statute of limitations since the plaintiffs had sufficient and timely notice of the facts such that they should have made further inquiry prior to the expiration of the statute of limitations.

The facts of this case, which are set forth in the First Department's decision, are decidedly sad.  The infant plaintiff was born suffering from Cornelia de Lange syndrome.  In her case it was manifested by the absence of her upper limbs.  Her parents brought suit seeking recovery for their economic expenses, since a cause of action for wrongful birth on behalf of the infant plaintiff does not exist in New York.

The child was born on September 25, 2000.  An ultrasound had been conducted on June 1, 2000 and it was ultimately learned that the narrative report for that ultrasound, which stated that all 4 limbs had been present, was incorrect.

I'm leaning toward agreeing with the dissent in the First Department's decision:

Plaintiffs could not properly have commenced this action prior to obtaining the films, since they could not make a good faith claim of negligence until that time. As the expert consulted by plaintiffs asserted, until those films were obtained and reviewed by their expert, plaintiffs had no way of determining whether malpractice had been committed in the performing and reporting of the results of the sonogram. The majority's observation that plaintiffs had notice that "something was amiss" does not, in my view, equate to a good faith basis to commence an action...Without the opportunity to view the film itself, no one could state whether the failure of the professionals who conducted the ultrasound and read the results to notice and report the fetal abnormalities amounted to negligence, or was instead a reasonable conclusion based upon what could be seen on the films.

While the director of risk management at the hospital states that no specific request for the sonogram films was made until March 11, 2003, and that the hospital's policy is to await such a specific request before turning over such items, there can have been no doubt that plaintiffs' attorney in this action would need to see the sonogram films themselves, not just the written summaries of their results. The assertion of such a purported policy does not necessarily justify the failure to turn them over, particularly since the hospital was not forthcoming with the films even after the specific request was made. Indeed, even after plaintiff's counsel, with dogged persistence, eventually succeeded in independently locating the hospital division in possession of the sonogram images, and when he notified the hospital of exactly where they could be found so copies could be provided to him, the hospital still failed to cooperate in providing counsel with a copy.

It seems to me that this decision effectively encourages hospitals to drag their feet when responding to requests for medical records.  Specifically, I would argue that med mal defendants now have the green light to sit on medical records that are particularly critical to a case as long as the plaintiff's counsel doesn't make a specific request for the particular incriminating document or imaging study that would reveal liability.

Of course, I'm sure that my numerous family members employed in the medical field would strongly disagree with me on this one, as would the defense bar.  And, for that matter, the New York Court of Appeals.  Which just goes to show that you can't win 'em all.

The New York Court of Appeals recently handed down a number of interesting decisions.  Here are summaries of 2 short, but relevant, decisions:

In today's video I discuss the State's Memorandum of Law submitted in opposition to the lawsuit challenging the lawyer advertising rules.

I also discuss this post from Flea, a physician's blog, which is in response to this post from Eric Turkewitz's New York Personal Injury Law Blog.  In Eric's post, he rationally discusses effective cross-examination techniques for attractive physician defendants in medical malpractice cases.  In Dr. Flea's post, he personally attacks Eric and suggests that physicians should refuse to treat plaintiff's medical malpractice attorneys and their families:

How does Eric Turkewitz look at himself in the mirror in the morning?

His wife and kids look like decent enough people (scroll down on link for picture). Where does Turkewitz find doctors in New York City willing to care for them?

The Court concluded that such interviews were not permissible under New York law:

In our view, there are compelling reasons for prohibiting such interviews. First, there are no provisions in the law permitting such informal disclosure. Second, formal discovery procedures are in place that would allow an "on the record" discussion with such witnesses in the presence of counsel for the opposing party. Third, we are concerned here with witnesses with privileged medical information, not merely witnesses who will testify to nonprivileged facts. Thus, the established case law that permits equal access to fact witnesses does not apply here. Although a person's relevant medical history is placed at issue when an action is commenced by or on behalf of that person, access to that medical history is not without boundaries...Unsupervised interviews with treating physicians in an ex parte setting may result in the intentional or inadvertent revelation of a person's irrelevant medical history.

Fourth, and perhaps most importantly, we can conceive of no reason for allowing a practice that concededly is not permitted prior to the filing of a note of issue to be permitted after the note of issue is filed...There is no statutory or regulatory authority in New York that would permit ex parte interviews with a plaintiff's treating physicians and, to the extent that prior cases of this Court suggest otherwise, they are no longer to be followed. As the Second Department succinctly wrote, "compulsion of such unsupervised, private and unrecorded interviews plainly exceeds the ambit of [CPLR] article 31" (Arons, ___ AD3d at ___).

Eric Turkewitz over at the New York Personal Injury Law Blog noted that two of the four Appellate Divisions, the Fourth and Second Department, have reached this conclusion, and predicts that the issue will likely reach the New York Court of Appeals.  I'm inclined to agree with him, but only time will tell if we're correct.