life as a PD 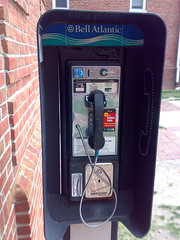 The following is one of the funnier stories from my tenure as an assistant Public Defender.

I was assigned to represent a guy with a long misdemeanor record on some sort of small charge--a petit larceny, if I recall correctly. He was one of literally hundreds of my clients (I usually had about 600 open misdemeanor files at any given time), about 50 of whom were incarcerated, including this guy--let's call him "Joe." I generally made it into the jail to see all of my clients once each week, although I tried to meet with them more often, if possible. I hadn't met with Joe yet, though, and, as I quickly learned, he was desperate to see me.

The only outgoing phone calls allowed from county lock up were collect calls. And we weren't allowed to accept collect calls from the jail. But, Joe still managed to get his message across.

Joe was all too familiar with this system, since he'd been in and out of it forever. And, he knew how to get around it. Until I was able to get to the jail to see him, he left about 10 messages in rapid succession on my voice mail each day, and they went something like this:

(Automated voice)You have a collect call from: "Ms. Black, it's Joe. You have to..." Would you like to accept it?

You have a collect call from: "Come down to the jail.." Would you like to accept it?

You have a collect call from: "Tonight to talk to me..." Would you like to accept it?

You have a collect call from: "Come see Joe, Ms...." Would you like to accept it?

You have a collect call from: "Ms. Black, PLEASE come see..." Would you like to accept it?

Joe knew that he had about 3 seconds each time, and he took full advantage of each and every 3 second opening. It was quite creative, actually, but the novelty of it wore off by about the third message. After 2 days, I was thoroughly annoyed with Joe and his constant barrage of 3 second messages.

Fortunately, I was finally able to get down to the jail and shortly thereafter was able to dispose of his case quite favorably.

The next day, I was checking my messages, and to my chagrin, there was another set of messages from him. I sighed and thought, "What the hell does he want from me now?"

You have a collect call from: "Hey Ms. Black, it's..." Would you like to accept it

You have a collect call from: "I just wanted to tell..." Would you like to accept it?

You have a collect call from: "Thanks Ms. Black..." Would you like to accept it?

You have a collect call from: "Thanks for your help..." Would you like to accept it?

I actually laughed out loud. That was the last thing I'd expected. I didn't get thanked all that often in that job. And I certainly hadn't expected it from Joe. It made my day.

Gee Mister, you sure look nice in those bike shorts. 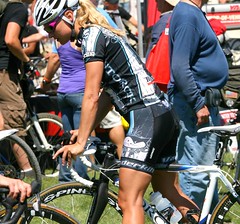 Here's another tale from my years as an Assistant Public Defender.

During my first year as an Asst. PD, I was assigned to represent a guy who was charged with exposing himself--a misdemeanor. The accusatory alleged that he pulled down his pants while in his mother's back yard and told a man who was riding by on his bike that he "sure looked nice in those bike pants."

Sounds pretty cut and dry, right? Well, it turns out my guy was mentally disabled. He was functional, but he definitely had issues. And, not just mental issues--physical issues as well. Urinary issues, to be exact.

When I first met him, he told me all about his urinary incontinence issues. Apparently, he had sudden, overwhelming urges to urinate, and he had a tendency to whip it out wherever he happened to be. And, he was in the process of doing so on the day in question, when a guy rode by on his bike, and my client felt the need to compliment him on his biking attire. It was fairly obvious to me that my client was being sincere. And it was pretty clear that the guy was mentally challenged. If nothing else, that was quite obvious.

The ADA and I were both new at the job, and handled only misdemeanors. Generally, we only dealt with a slew of shoplifting cases from the mall, occasional assaults, and minor property damage (It wasn't until we were promoted to city court that we were exposed to the dirty underside of human existence: drugs, prostitution, public lewdness--the revolving door of the criminal justice system). We weren't sure what to do with him. He had minimal contacts with the criminal justice system, but the case wasn't a typical case for a suburban town court.

We discussed my client's case briefly and decided to adjourn it so that we could talk to higher ups at our respective offices for guidance.

On the adjourned date, my client approached me and pressed a manila envelope exploding at the seams into my hands. He advised me that it contained medical records that established his medical condition and thus his need to drop trousers whenever the need arose. As he walked away from me, I started to remove the documents from the folder when I noticed that they were damp--peculiarly damp. And, they smelled funny. They smelled kind of like--urine.

Somehow, I managed to keep my lunch down. I'm still not sure how.

I held the driest corner of the envelope between my thumb and forefinger and quickly approached the judge's clerk. I asked her if we could call my guy's case right away. As soon as his case was called, I asked to approach the bench and explained the situation to both the judge and ADA. "I swear. He peed on the papers. Here, see for yourself. Can't we just unload this one now?"

Surprisingly, they weren't all that interested in examining my urine-soaked offering.

The good news was that the ADA had spoken to his supervisor, and was authorized to extend a very reasonable offer. We gladly accepted it and my mentally disabled, urinary challenged, client was free to leave.

My parting advice to him was try to pee in the bushes in the future--and to keep his fashion opinions to himself.

I've decided to write about my experiences as an assistant public defender in Monroe County.

Today--my first jury, in 1996, I think it was. This was, all things considered, the least interesting of all my jury trials, but it's as good a starting point as any.

Our judge was offended at the thought that we'd leave his court without having done a jury trial so he forced our hand. I had a client who was charged with Criminal Mischief in the Fourth Degree (Class A misdemeanor, punishable by up to one year in jail) and Attempted Petit Larceny (Class B misdemeanor punishable by up to 90 days in jail).

My client didn't have an extensive record, but had done a a short stint in jail on a probation violation in the past. He was accused of breaking into a car in the middle of the night and attempting to steal a cell phone, breaking the charger in the process.

He's been discovered in the car by a neighbor of the complainant. They both lived in the same apartment complex and this witness (who was, if I recall, a part-time security guard who really, really wanted to be a cop) testified that he watched my client walk up the street, trying the door handles of each car until he happened upon the complainant's, which happened to be unlocked.

The witness then ran outside, confronted my client, and asked him what he was doing. My client allegedly said he was the boyfriend of the owner of the car, but wasn't able to state her name.

The cop-wanna-be yelled for someone to call the cops and restrained my client until the cops showed up.

The ADA's plea offer was fairly reasonable, but the judge indicated that he'd only accept a plea to the top charge and would sentence my client to 1 year in jail. As I'd mentioned, the judge wanted a trial, and damned if he was going to get one. Obviously, there was absolutely no incentive to plea, so we set a trial date.

The trial started on 10 pm on a week night--yep--10 pm. This was a town court that met at night, and the trials occurred after regular court.

We picked a jury, the gung-ho cop-wanna-be witness showed up--of course. His testimony didn't differ much from what I'd expected, although he clearly exaggerated what he could see, given that it was pitch black outside when he "witnessed" the break in. The key point I brought out on cross was that he really couldn't see what my client was doing inside the car given the lighting and his location inside the building when he first saw my client.

His big mistake was that he was so eager to convict my client that he made up all kinds of details about the interior of the car. He was like the Energizer bunny on crack--he kept going, and going, and going. I asked him question after question about the phone, the charger and the car and he oh-so-helpfully came up with all sorts of random details that the owner later contradicted when she testified.

In fact, she seemed downright confused when I asked her about them. I'd describe the ridiculously crazy, detailed description of the phone, the charger or the dashboard and then she'd look at me like I was on drugs and say "no, it actually looked totally different than that..." and then she'd go on to tell me what it really looked like. It was classic.

She also stated that the phone had been moved, but was never removed from her car. According to her, a very small piece of plastic had broken off of the charger. She also admitted that it wasn't necessary to damage the charger in order to steal the phone. And, she testified that my client was NOT her boyfriend. Big shocker there.

My client did NOT testify. Are you surprised?

The jury was out for maybe 20 minutes and returned with their verdict at 2 am. Yep. You read that correctly--2 am.

They'd apparently come to the conclusion that my client was trying to steal the phone but failed and inadvertently (ie. unintentionally) damaged the charger in the process. Accordingly they convicted him of Attempted Petit Larceny and acquitted him of the more serious charge. Although he'd been charged with the reckless sub-division of Criminal Mischief, I think they simply compromised in order to get the damn thing over with. It was late and everyone was tired.

The judge promptly (and unhappily--he'd been gunning to send him away for a year and my client knew it) sentenced him to 90 days, on the spot, in front of the jury. The best part then followed. My client jumped up, shouted "Yes!", grabbed a garbage bag with his clothes from underneath the table and walked over to the court deputy, his arms extended. As he was lead away, he yelled over his shoulder "Thanks Ms. Black!"

The look on the face of some of the jurors was priceless. They clearly wondered if they'd made the wrong decision. Too little, too late, I guess.

Although I hadn't technically won in that I'd not gotten a "not guilty", I had a (very) happy client and a trial under my belt. All in all, it was a good night--albeit a really late one.