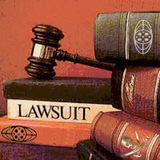 The Daily Record was not published yesterday due to the holiday, so tune in next Tuesday for the next installment of my Legal Currents column.

In the meantime, let's take a brief jaunt back to law school, shall we?

My thoughts were drawn to law school a few days ago as I sat in the airport during our layover in Atlanta. I came up with a most-excellent law school exam question while watching the seemingly chaotic interplay of activity amongst the luggage handlers, traffic controllers, and airplanes.  I commented to my husband that the multiple parties and entities engaged in these endeavors was mind boggling, and as I began to expound on the possibilities of complex litigation should an accident occur, my decidedly non-lawyer husband's eyes began to glaze over.

I was still pondering this issue the next day when I ran into a lawyer that I know while out and about on important business.  We engaged in a brief discussion and he seemed far more interested in this topic than my husband had been, however we were unable to engage in a lengthy analysis of the issues presented  since we were required to mediate repeated disputes amongst those in attendance.

But, dear readers, I knew that you would appreciate the opportunity to analyze the scenario that I dreamed up while awaiting our flight.  It's more than a bit Palsgraf-like, which makes it all the more fun!

The scenario began to take shape when I noticed a luggage handler driving a baggage trolley with a  wayward piece of unsecured luggage sitting on top of the car.

I wondered what would happen if the luggage fell off and onto the runway that the trolley was traveling across just before a plane departed...

Imagine if you will--Airline Bankrupt's employee forgot to place the loose piece of luggage in the trolley.  That very same piece of luggage was not properly screened by TSA (just as most cargo is not yet screened) and thus a number of butane lighters enclosed therein are overlooked.

The luggage falls onto the runway as the trolley crosses it.  The plane waiting for clearance to take off receives it from the federally employed air traffic controllers and begins to taxi down the runway.  The plane runs over the luggage at speeds of 60 mph and careens off the runway.  The butane in the luggage explodes (don't ask me how that occurred--we won't know the answer until we hire an expert).

The explosion startles a passenger on the plane with pre-existing heart problems and causes him to go into cardiac arrest.  Another passenger, a physician, runs to his side and she begins to render assistance.  Unfortunately, nothing can be done to save him.

Simultaneously, one of only 3 federal Marshalls on duty that day just happens to be on this plane.  He leaps into action and tackles the first Muslim person that he sees, whips out his taser and tases the poor woman, who later dies as a result of her injuries.

The plane stops spinning and comes to rest on the side of the runway.  As local emergency response personnel arrive upon the scene and rush toward the plane, one of them trips on a large crack in the runway and breaks her leg.  The county-owned airport had previously been notified of this defect and had scheduled repairs a week down the road.

Meanwhile, the head pilot, a long-time alcoholic, stumbles off the plane with bloodshot, glassy, watery eyes and a strong odor of alcohol emitting from his breath, puts his arm around a particularly attractive female law enforcement officer and mumbles "Wha's happening, occifer?"

Discuss the liabilities amongst yourselves.

And, if you happen to be a law professor, feel free to use this example on one of your exams.  I'm just that generous.

Posted at 10:27 AM in Humorous Tidbit, Personal Injury | Permalink | Comments (0)