There's criminal activity afoot and I'm here to tell you all about it, live from the Big Apple!

Can It Really Be That Simple? 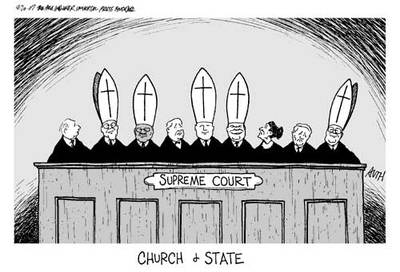 There's criminal activity afoot.  And I'm here to tell you all about it.

Here's a great exchange from a New York courtroom:

I'd Have to See Them Dance

Female potential juror: I can't sit on a jury for religious reasons. I don't believe in judging people.

Lawyer: This is a negligence case. You won't be deciding if somebody is good or evil. There's no question of morality involved.

Female potential juror: Whatever -- it's against my religious convictions to judge people.

Lawyer: You understand that we're not asking you to send someone to Hell -- you just have to decide whether or not they were clumsy.

Here's a classic and highly unusual case originating right here within the confines of our fine state. In Srambovsky v.  Ackley, 169 A.D.2d 254, 572 N.Y.S.2d 672 (1st Dept. 1989), the plaintiff sought recission of a real estate contract for the purchase of a home based upon allegations that the house was alleged to be haunted.  The First Department concluded that the trial court improperly dismissed this cause of action.

A number of the more amusing parts of this case are set forth below, including a reference to the movie "Ghost Busters":

The unusual facts of this case, as disclosed by the record, clearly warrant a grant of equitable relief to the buyer who, as a resident of New York City, cannot be expected to have any familiarity with the folklore of the Village of Nyack. Not being a "local," plaintiff could not readily learn that the home he had contracted to purchase is haunted. Whether the source of the spectral apparitions seen by defendant seller are parapsychic or psychogenic, having reported their presence in both a national publication ("Readers' Digest") and the local press (in 1977 and 1982, respectively), defendant is estopped to deny their existence and, as a matter of law, the house is haunted. More to the point, however, no divination is required to conclude that it is defendant's promotional efforts in publicizing her close encounters with these spirits which fostered the home's reputation in the community. In 1989, the house was included in a five-home walking tour of Nyack and described in a November 27th newspaper article as "a riverfront Victorian (with ghost)." The impact of the reputation thus created goes to the very essence of the bargain between the parties, greatly impairing both the value of the property and its potential for resale.

While I agree with Supreme Court that the real estate broker, as agent for the seller, is under no duty to disclose to a potential buyer the phantasmal reputation of the premises and that, in his pursuit of a legal remedy for fraudulent misrepresentation against the seller, plaintiff hasn't a ghost of a chance, I am nevertheless moved by the spirit of equity to allow the buyer to seek rescission of the contract of sale and recovery of his downpayment.

"Pity me not but lend thy serious hearing to what I shall unfold" (William Shakespeare, Hamlet, Act I, Scene V [Ghost] ).    From the perspective of a person in the position of plaintiff herein, a very practical problem arises with respect to the discovery of a paranormal phenomenon: "Who you gonna' call?" as the title song to the movie "Ghostbusters" asks...In the interest of avoiding such untenable consequences, the notion that a haunting is a condition which can and should be ascertained upon reasonable inspection of the premises is a hobgoblin which should be exorcised from the body of legal precedent and laid quietly to rest...

Finally, if the language of the contract is to be construed as broadly as defendant urges to encompass the presence of poltergeists in the house, it cannot be said that she has delivered the premises "vacant" in accordance with her obligation under the provisions of the contract rider.

Application of the remedy of rescission, within the bounds of the narrow exception to the doctrine of caveat emptor set forth herein, is entirely appropriate to relieve the unwitting purchaser from the consequences of a most unnatural bargain.

What In the World Is a Wuzzle?

A copyright case, Selmon v. Hasbro Bradley, Inc., 669 F.Supp. 1267 (S.D.N.Y.,1987), involving "whats" and "wuzzles" lent itself to an inordinate amount of puns and resulted in a very amusing decision.  Here are some of the funnier excerpts for you on this chilly Friday morning.  And, should you have Westlaw access, there are entertaining pictures available on Westlaw as well:

Once upon a time, in lands far, far away, lived strange but cuddly creatures that became involved in a struggle for identity. In “Whatland,” which is just a few miles north of Fairyland, lived the “Whats.” In the “Land of Wuz” lived the “Wuzzles.” We don't know where “Wuz” was, but we are told we could get there if we “snuzzle a Wuzzle.” It appears that for a time, never the two did meet. But one day the creators of the “Whats” discovered the “Wuzzles” and were astonished to learn that “Whats” and “Wuzzles” had certain similarities. Most specifically, it seems each “What” and “Wuzzle” had the names and characteristics of two different animals combined into one. In “Whatland,” there was “Me-ouse” (a mouse and cat combined), “Wissh” (a walrus and seal), “Ch-uck” (a chicken and duck), “Skeet” (a skunk and parakeet), “Pea-tur” (a peacock and turkey), “Gir-itch” (a giraffe and ostrich), “Leo-Lamo” (a lion and lamb), and “Beav-aire” (a beaver and bear). The “Wuzzles” included “Moosel” (a moose and seal), “Butterbear” (a butterfly and bear), “Hoppopotamus” (a rabbit and hippopotamus), “Eleroo” (an elephant and Kangaroo), “Rhinokey” (a rhinoceros and monkey), and “Bumblelion” (a bumblebee and lion).

The questions before us are really quite simple: “Just what's a “What,” what's the similarity between a “What” and a “Wuzzle,” and “Wuzzle” we do about it?”...

On defendants' various motions, we find that: (1) there “wuzn't” substantial similarity between the “Whats” and the “Wuzzles,” and summary judgment on the copyright infringement claim is granted; (2) plaintiffs' cause of action in quasi-contract “wuz” preempted by the federal copyright laws and grant defendants' motion for summary judgment on that claim; and (3) this action “wuzn't” sufficiently frivolous or vexatious so as to warrant attorney's fees or sanctions, and defendants' motions for such are denied.

There's criminal activity afoot--and it's a good thing, because these guys keep us in business!

Ain't It the Truth?

Yesterday, my kids were watching the movie Shrek 2 while we drove to Syracuse to spend Easter with the Catholic side of the family.  The following scene brought me back to my public defender days.  Shrek's response to Donkey's tirade is classic:

Shrek: Donkey! You have the right to remain silent! What you lack is the capacity.

Haven't We All Had Conversations With Clients Just Like This One?

Here's another tidbit from one of my favorite blogs, Overheard in The Office:

6AM Well, She Was Lying Down in the Bed

Lawyer: Then why did you have sex with your cousin while she was sleeping?

Client: I honestly thought she wanted it. Really, I would never do anything to hurt her. I think of her like a sister.

Lawyer: Perhaps we shouldn't put you on the witness stand.

Hey Baby, What's Your Sign? Don't I Know You From Somewhere? Oh, And Would You Like to Take a Hit of Cocaine?

At issue in a recent New York Court of Appeals case, People v Gomcin, 2007 NY Slip Op 02590, was whether the lower court correctly determined that there was insufficient probable cause to support the defendant's arrest for possession of cocaine.  In this case an undercover female officer stationed inside a club in Queens radioed another member of the undercover team and advised that a man had approached her and asked "if she wanted to take a hit of cocaine."  A few hours later, the police evacuated the club and searched every patron as they exited the club.  Cocaine and a gun were recovered from the defendant and he subsequently moved to suppress the evidence on the grounds that it was obtained as a result of an illegal search unsupported by probable cause.

The trial court concluded that the defendant's inquiry alone was insufficient to establish probable cause for the arrest and Appellate Division agreed:

Reasoning that defendant's inquiry as to whether the female undercover officer "wanted to take a hit of cocaine" was "an inquiry as to her desire and state of mind, and it's not enough to give probable cause to believe that [defendant] possessed drugs," Supreme Court granted defendant's motion to suppress the drugs and gun...The Appellate Division agreed with the motion court's "reasonable inference" that "defendant's statement to the undercover officer was merely an inquiry into her wishes and desires.' The defendant's statement was made in a social club, where casual conversation is rampant. The defendant may have been attempting to strike up a conversation with a female" (id. at 495).

The Court of Appeals concluded that the lower court's determination should not be disturbed on the grounds that the determination of probable cause is a mixed question of law and fact and the record below supported the Appellate Division's conclusion.

Makes sense to me.  At least the Court of Appeal's determination does.  I'm not so sure about the lower courts' conclusions though.

I'm a bit skeptical about the supposition that the defendant was simply trying to "strike up a conversation with a female."  For some strange reason I find it hard to believe that the inquiry "Would you like to take a hit of cocaine" is the latest version of "Hey baby, what's your sign?"  or "Is your father a thief?  Because it looks like he stole the stars from the sky and put them in your eyes."

And, I'm not sure that I'm buying that the defendant was conducting some sort of unscientific survey regarding the club patrons'  "desire and state of mind".  I envision some guy walking around with a clipboard and pen, querying each patron as to whether, at that particular moment in time, they'd like to take a hit of cocaine, and then tabulating the results at the end of the night.  Not bloody likely, in my humble opinion.

But, of course, reasonable minds can differ.

So, if your reasonable mind really and truly thinks that this guy  was just trying to hit on the undercover cop or assess her state of mind, then have I got an investment opportunity for you!  You see, there's this bridge in Brooklyn and...hey, don't I know you from somewhere?  Maybe I met you at my cousin's wedding?  Or maybe you're Joe's little sister?  You kind of look like him.  No?  Oh, well, then would you like to take a hit of cocaine?   Oh, ok, just wondering.