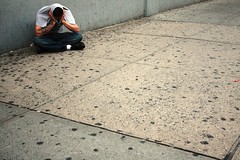 Last week, Chris Brogan wrote a thought provoking blog post in which he suggested a looming social media crash, resulting from a deluge of online connections and the subsequent contacts that we receive as a result of our online connections. He posited that it was becoming increasingly difficult to maintain online relationships and adequately respond to people's requests.

But even with an online presence like mine, which pales in comparison to Chris', I'm finding it nearly impossible to provide meaningful responses these days, even when I want to.

And, truth be told, that fact frustrates me beyond belief as I find that I'm failing to provide responses in a timely or useful fashion and am offending people that I truly like and respect (and those whom I've never met) in the process.

Let's use the past week as an example, keeping in mind that I'm swamped with work right now (and thus put most of my blogs on hold for the summer), am facing two major book deadlines in mid-September along with my regular workload, and traveled to Atlanta the latter half of last week to give a presentation on social media for lawyers. In other words, I'm more than busy and am struggling to keep up.

Over the last week and a half or so I received the following inquiries via phone, Twitter, Facebook, LinkedIn or email, the vast majority of which required a response of some sort (and these don't include what I consider to be spam contacts--such as multiple PR suggestions from complete strangers  to write about an issue on my blog (that generally has nothing to do with the topic of the blog), etc.):

Suffice to say, I am truly overwhelmed and find myself increasingly unable to respond to the multiple requests for my advice, time and energy (all requested on a volunteer basis). I try my best to respond, but sometimes either fail to do so in a timely manner or dash off a quick, shallow reply.

If I've responded inadequately to one of your inquiries in recent months, and we're "friends" via social media or otherwise, I apologize.

If you had a legitimate request and I've not yet responded to it, I likewise apologize. My lack of response is likely because I don't have a quick answer, but truly do want to address your inquiry and give it the attention that it deserves, so I've tabled it for a few days.

If you're a complete stranger with a totally random request that I've ignored, what did you expect? Go bother someone else.

I'm right there with you and Chris. It seems like over the past year the flood gates have opened. I'm on the American Association for Justice Public Policy and Marketing Committee and we were talking about the "noise" that drowns out legitimate online interactions. Seth godin had a great article on the resilience and power of slow change that I swear I wrote in a dream where I was getting bombarded with social media requests.

Just think of what its like for attorneys that don't partake in social media? It just seems like everyone is jumping in head first without any cohesive strategy on how to do this efficiently and, well...for a lack of a better term....sanely.

We're going to increasingly have to have "non social media days" where we take a break from our computers, iphones, ipads, and other gadgets and just sit back and relax. I've found that when I am able to remove myself from the cacophony that I can truly work more efficiently.