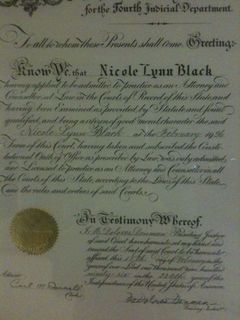 Today, Brian Tannebaum celebrated the 15th anniversary of his admission to the Florida bar and in honor of the occasion, drafted this insightful post which offered advice gleaned from his 15 years in practice.

In February, the 14th anniversary of my admission to the New York bar passed. I loved the idea behind Brian's post, and in keeping with that theme, I offer the following advice to young lawyers (from a Daily Record article that I wrote in December of last year.)

I challenge other experienced lawyers to do the same.

An open letter to future lawyers

I wanted to begin this week’s column by sharing a poem I wrote while in law school, an open letter to future lawyers:

I entered law school fearful and proud —yet knowing who I was
But the metamorphosis rudely and abruptly began.
As the classes … days … weeks passed, case after case
I became “Ms. Black” —someone I didn’t know.
Loneliness and insecurity became mine
And I reveled in my solitude.
All confidence I had in myself was lost
In some dusty old book in the corner of the library.
Perhaps if I sheperdize that book,
I might discover what has become of my self.
If it’s been overruled,
I’d like to know the new holding.
It seems I’ve gained knowledge
But lost my self.
I wonder how that would balance out
On the sacred scales of justice?

To the future lawyers of the world, know that those of us admitted to the bar once were where you are. Most of us still remember. We understand.

But we also know more than you. We’ve been doing this a lot longer than you have. Most of us know what we’re talking about.

Rule 2 is very important: You can’t have everything. You think you can, but you can’t. You’re naïve to think this, but it’s not your fault. You were spoon fed this nonsense as you were growing up, and the people who told you that you could have it all were cruel and negligent for doing so.

Life is all about compromise. Master that skill and you’ve got it made.

Rule 3 is very similar: Palsgraf is a life lesson. Life is unpredictable. Stuff happens. You can’t always control it or predict it.

Get used to it. That’s life. The skill is knowing how to deal with the unexpected-don’t let it throw you off track.

Rule 4: Perspective is everything. When life happens, roll with it as best you can. Alter your perspective and you alter your reality. Master this skill. It will take you far.

Rule 5 is simple: Success is in the eye of the beholder. Don’t let anyone else define success for you —not your parents, professors, career counselors or classmates. Only you know what success is for you. Delegate that determination at the risk of your happiness, stability and sanity.

Rule 6 also is an important one, so pay attention: Defy everyone’s expectations —don’t be an asshole. People think lawyers are jerks for a reason. Don’t live up to their expectations. Treat your clients, your colleagues, your staff and your opposition with respect.

Don’t be sleazy and underhanded. Don’t be arrogant. Avoid being pompous. Trust me, if you ignore this advice, it will come back to haunt you in the long run.

Rule 7:The law is not your mistress. Don’t buy into that idiocy. Your law degree simply i s a means to an end. It’s a way to pay the bills and feed your family. Hopefully, it’s a fulfilling process for you. If not, then you’re not using your law degree in the right way.

Remember, rule 3 — stuff happens. If you don’t like the career path you’re on and it’s interfering with your life, reassess your path and alter your course.

Finally, rule 8: Do not let the law engulf you. You should not emerge from law school as a bruised and broken shell of the person you once were. Don’t let them do that to you. Retain your true essence. Never forget why you chose this path.

Always, always remember who you are. Never lose sight of you.