Tax the Rich to Feed the Indebted? 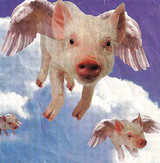 Corporation Counsel Michael A. Cardozo last night called for legislation to help attorneys working in the public sector cover the cost of repaying their student loans....He proposed that the program be funded by increasing the $250 fee for taking the bar exam and the $350 fee for biannual state registration for attorneys employed by large and mid-sized firms.

What an absolutely fabulous idea, dahling!

Let's pull a Robin Hood on BigLaw and tax the cold hearted, rich bastards at the top of the legal ladder and send some of that money downhill to the lowly  do-gooder Legal Aid lawyer-types--those naive "true believers" who actually want to try and make a difference in the world--aka--the alleged "losers" that those who attended "top tier" law schools wouldn't dare be seen with in public, lest they be taunted endlessly by their colleagues, most of whom seem to spend inordinate amounts of time leaving nasty, misogynistic, anonymous comments at The Volokh Conspiracy, The Wall Street Journal Law Blog and Above the Law blogs.

Oh, that such a law would come to pass!

Call me cynical, but I just don't see it happening.  There's no way that the most powerful attorneys in New York would allow it to happen.  And, this less-than-rousing endorsement from the speech of the bill's sponsor serves only to support my suspicions that a law of this sort will never come to fruition:

There is some slight hope in both Albany and Washington that some kind of loan forgiveness program might become a reality. This year the State created a limited loan forgiveness program, structured along the lines I just mentioned, for attorneys employed by district attorney offices in the state Unfortunately, the Legislature appropriated just $1.5 million to fund the program, which expires in any event a year from now. Moreover, the legislation is limited to district attorneys offices, and, unlike other legislation that has been introduced in Albany, doesn’t include public defenders, attorneys representing state or local governments, or civil legal service attorneys. (Emphasis added).

Oh, and forget what I said about do-gooder Legal Aid types.  Apparently just those who prosecute stand to even have a chance of benefiting from a loan forgiveness program.  Imagine that.

Mark my words, the only time public interest lawyers will experience loan forgiveness straight from the pockets of BigLaw is when when pigs fly.