Someone Took a Wrong Turn

Whoever reached my humble legal blog via the Yahoo search "sexually experienced woman ,use of long fingernails" clearly took a wrong turn.   And, I'm still not quite sure how you even ended up at Sui Generis.

In any event, sorry to disappoint you and I wish you the best of luck in finding that which you seek.  And, next time, try not to stray off the beaten path.

Sunday's term was stare decisis, whcih is defined as:

(stah-ree duh-sigh-sis) n. Latin for "to stand by a decision," the doctrine that a trial court is bound by appellate court decisions (precedents) on a legal question which is raised in the lower court. Reliance on such precedents is required of trial courts until such time as an appellate court changes the rule, for the trial court cannot ignore the precedent (even when the trial judge believes it is "bad law").

Carlos got it right!

Today's term, as suggested in a recent comment by Buffalo, NY attorney Bill Altreuter of the Outside Counsel blawg is:

It was the first time I'd ever heard of it.  Anyone else out there know what it means?  And, as always, no dictionaries, please.

For those who are interested, here are the poll results thus far:

What features do you read on a regular basis?

Somewhat surprisingly, the "Define That Term" feature isn't as popular as it once was.  Nevertheless, I'll keep it for now, since there is still some interest in it.

The poll is still open, so if you haven't yet voted, feel free to do so.  The poll can be found here.

In People v. Grant, 2006 NY Slip Op 07394, the New York Court of Appeals concluded that harmless-error analysis applies to Sandoval errors committed by a trial court.  The Court explained its holding as follows:

When an appellate court reviews the allowance as impeachment evidence of a defendant's prior convictions, the underlying issue with which to be concerned, as relevant here, is whether the apprehension of the introduction of evidence of the defendant's prior criminal, vicious or immoral conduct will undesirably deter the defendant from taking the stand and thereby deny the jury or court significant material evidence... The other consideration pertinent to an assessment of the prejudicial impact of admitting such evidence is, of course, whether the testimony to be elicited will have a disproportionate and improper impact on the triers of fact...

If, in a particular case, the factfinder is deprived of no significant material evidence, then the defendant has not been denied a fair trial and reversal of the conviction would serve no jurisprudential purpose... Assuming that the trial court here abused its discretion, we agree with the Appellate Division that any error was harmless, since defendant's decision not to testify did not deprive the jury of any critical information...(Internal citations and quotations omitted).

Eric at Indignant Indigent adeptly summarized the procedural ramifications of this decision for all New York practitioners and also provided a recommendation specific to Fourth department counsel:

The upshot of this decision is that trial defense counsel must do at least two and preferably three things to even give his or her client a shot of obtaining meaningful appellate review of a trial court's Sandoval ruling: 1) put on the record that the defendant's decision not to testify was based on the trial court's Sandoval ruling, 2) make at least a limited proffer of defendant's testimony, and 3) put on the record that the trial court's Sandoval ruling is depriving defendant of his Constitutional right to present a defense and testify on his own behalf. That last one is critical, because it will (hopefully) trigger the stricter standard of harmless error review applicable to constitutional error (i.e. the reviewing court will have to find the Sandoval error harmless beyond a reasonable doubt).

And of course, in the Fourth Department a defendant must object to the trial court's "ultimate" Sandoval ruling to even preserve the issue for review in the first place.(See People v Mc Millon, 2006 NY Slip Op 06993 [available here].)

Judge Smith offered an eloquent dissent, asserting that a trial court's error that resulted in preventing a defendant from testifying is never "harmless":

The majority thinks the case against defendant was so "overwhelming" (majority op at 5) that nothing he could possibly have said would have led a jury to acquit him. I do not suggest that I disagree; but I do not think it is our place, or any court's place, to decide that question. To hold that interference with the defendant's right to testify may be overlooked because of his failure to make a "proffer" that the trial court finds "creditable" (majority op at 6) is to sanction a trespass by the court on the jury's province that is not consistent with the way our system works.  (Emphasis added).

The italicized language reminds me of the reason that I have always been and will always be a criminal defense lawyer at heart.  Without the opportunity for a fair determination of the facts by a jury of our peers, that ideal will be extinguished.  Unfortunately, the Court's decision in this case appears to be a step in that very direction and for that reason, I find it to be somewhat troubling.

And, the overall tenor of the majority's decision reminds me of this quote from Alice In Wonderland:  "No! No! Sentence first -- verdict afterwards".    Is that truly the direction in which we're headed?   I,for one, sincerely hope not.

The Monday NY Blawg Round Up

Alas the weekend is over and it's already Monday again.  But, the good news is that it's time for the weekly New York blawg round up of interesting posts from my fellow New York blawgers:

It's No-Fault of NY

And, last, but not least, a post about a New York case that I'd forgotten to include last week can be found at the Religion Clause blog:

Better late than never, I suppose.

Wednesday's term was character witness, which is defined as:

n. a person who testifies in a trial on behalf of a person (usually a criminal defendant) as to that person's good ethical qualities and morality both by the personal knowledge of the witness and the person's reputation in the community. Such testimony is primarily relevant when the party's honesty or morality is an issue, particularly in most criminal cases and civil cases such as fraud.

As always, educated guesses are welcome, but no dictionaries are allowed.

You may have already come across this rather unorthodox Notice of Appeal, but if you haven't yet seen it, it's refreshingly forthright: 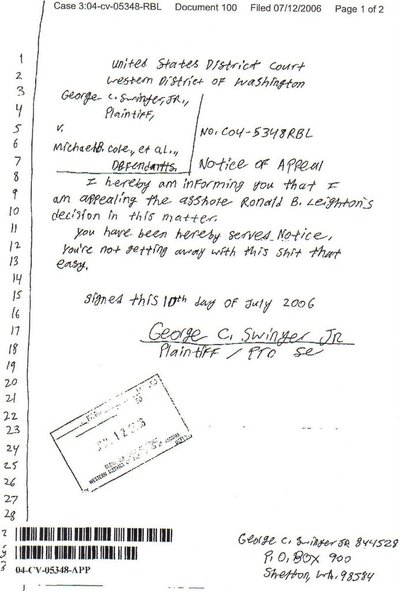 Via the Sienko Law Blog I learned of a recent New York Law Journal article regarding the proposed changes to the New York lawyer advertising rules.   The article summarizes some of the criticisms of the proposed rules raised by a number of different bar associations:

"[T]he City Bar respectfully submits that the Proposed Rules contain content-based restrictions that would impinge on a lawyer's First Amendment right to engage in commercial speech, and would prevent consumers from obtaining truthful, non-misleading information about the availability of legal services that would be relevant to the consumers' selection of a lawyer," the city bar's Committee on Professional Responsibility said in an Oct. 12 draft report.

It also joined several other critics in questioning proposed new advertisement retention and filing requirements that would "create a tremendous burden on lawyers without any evidence that they would further the overall objectives of those rules." Generally, the city bar's draft report deems the proposed new rules "unworkable."

I've raised those very concerns in my prior posts on this issue, so it's heartening to learn that others are doing so as well.

And, if you haven't yet submitted your comments, the deadline of November 15th is quickly approaching, so make sure to do so ASAP!

They're at it again, those crazy prosecutors.  It's time for another round up of their misdeeds:

Once again, I'm forced to wonder why prosecutors can't behave themselves as well as their colleagues in the private bar and, of course, the judiciary--none of whom would ever, for example,  barter drugs or sex for services rendered.